For the last six weeks, the “bigs” (Will, JP and ALG) have been rehearsing and practicing for the church Christmas play.  They had several rehearsals, lots of line practicing and costume fittings.  Here’s how it broke down:

Will playing the prophet Isaiah 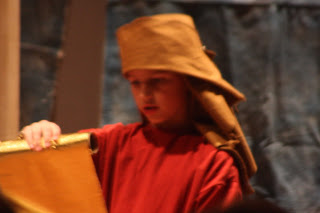 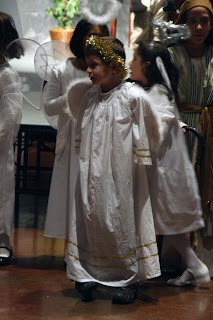 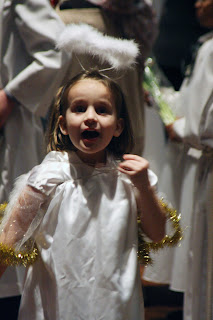 Showtime was Friday evening.  My dad joked that he stood in line and scored $65 mezzanine level seats for the production.  Funny guy.  Scott, Luke, Clare and I, along with my parents and cousin Mickey were their cheering section.  It was great fun.  They told the Christmas story from the perspective of the angels.  It was really, really well done.  You could hear the kids, most of them had their lines memorized, the backdrops and scenery were beautifully crafted and the story was so well written.  Little sweet, little humor, lots of love.

Can you tell I was proud?

Will was very nervous beforehand, but you couldn’t tell once he came out on stage.  As a non-talking angel, Anna-Laura happily followed the older angels on cue and smiled the ENTIRE time.  She was totally in her element.  John Paul just cracked me up.  Par usual.  The angels all wore sunglasses during one part of the play.  Just before his two big lines, while the rest of the angels were facing forward, he turned around, hiked up his costume and started digging in his pockets for his sunglasses.  He spun around just in time for his line, sunglasses in hand. 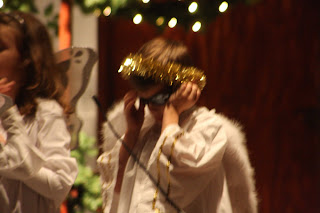 Before I could give the actors proper hugs, they beelined for the cookie reception.  Actors. 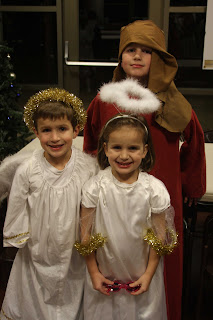 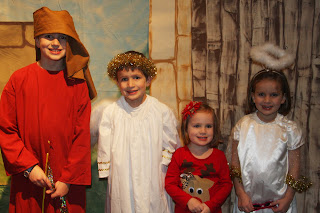 I hope they decide to do it again next year.  I might even volunteer as a stage mom!