Yes, that got two exclamation points.  Going up to the kids’ school for Christmas parties is always so much fun.  Mainly because they still want me to come to them.  In fact, I got asked like a bazillion times (I counted, thankyouverymuch) if I was coming.

One quick story and then I’ll get back to the day.  As I was leaving, I ran into a friend who has a son in Will’s class (my oldest), her third.  She said B asked her not to come to his parties anymore.  That just made me sad.  For her and for what’s coming for me.  I mean, I don’t want to be the weird mom still crashing the party when he’s a senior in high school.  I’m hopeful I’ll be the “cool” mom.  The one where his friends beg him to invite me.  Yeah, that’s probably not gonna happen, but a girl can dream, right?

The kinder and first-grade parties were just nuts.  The kids were all hopped up on sugar with crazy happy grins on their faces.  Parents were snapping photos like lunatics.  And there must’ve been 500 pizza boxes stacked in the corner.  It was still fun to see them so giddy with their friends.  Aren’t school parties the best? 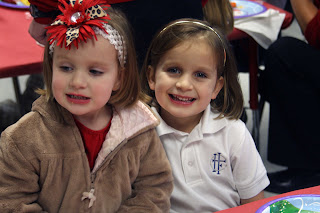 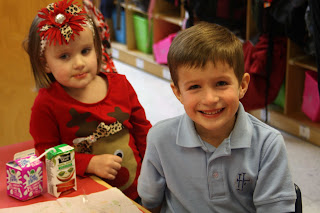 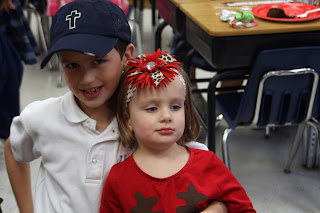 Clare’s into this new thing of not looking anywhere near the camera when we say “smile!”  Stinker.  The party mood definitely shifted when I hit the fourth grade room.  Way less mania, alot more socializing.  We stayed there the longest 🙂

Will’s class was definitely stoked about the school play.  He was one of the 10 lords a leaping, while some of the girls were the 9 ladies dancing.  They were all so nervous.  So cute and innocent.  Will informed me he had stage fright and was very worried about not leaping right.  “Mom, I’m not very good at leaping,” he muttered.  “It’s just not my talent.”  At least the boy knows his gifts.  I would disagree, though.  Scott said he did beautifully.  And, I don’t know about you, but he looks like SIXTEEN in this picture!? 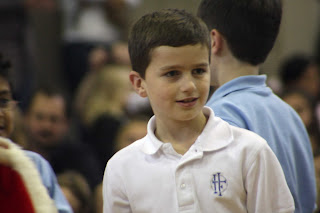 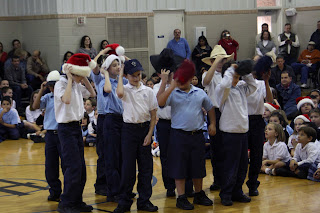 I was on party duty, Scott was on play duty.  He said it went off without a hitch and the kids were fantastic, as expected.  All in all, a really great way to get us in the Christmas spirit and focus our hearts on Advent.  The waiting, the anticipation…it’s awesome!