Ah, sweet Paris. We slept in a little and finally got moving. I was so excited to get going, I plugged in my hairdryer using the ADAPTER (read: not a converter) and subsequently blew the fuse and all electricity in our hotel room. I’m pretty sure the front desk muttered something about incompetent Americans. Scott just laughed. I did not. The maintenance guy arrived in a jif and we were back in business. That makes travel tip #2.

We made our first foray onto the Paris metro system, which was very similar to the one in Rome. So, that wasn’t intimidating, it was just the myriad of 14 different lines (compared to Rome’s 2) that threw us for a loop. Americans have GOT to jump on this public transit train. We went all over Paris for 3 days for less than $30. Enough about efficiency, onto stained glass. We ventured to Sainte Chapelle for our first stop and it did not disappoint. Just as we reached the top of the stairs, this was the feast for the eyes. Wowza. That morning sun just lit up those windows. 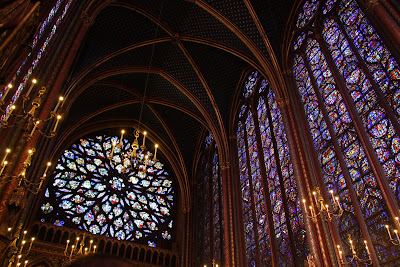 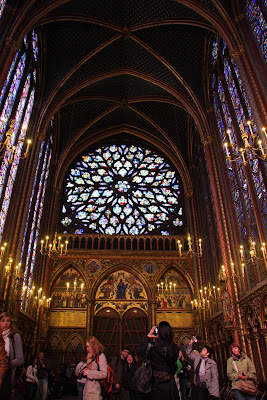 This next comment is totally for my brother. We were super excited to find an English-speaking gentleman to take our photo. First question, “Um, which button do I push?” Let’s see, that BIG BLACK BUTTON that’s on EVERY STINKING CAMERA, sir. Still, he could not focus it. Travel tip #3: Look for someone with a camera like yours, regardless if they speak English or not, they will know how to use it. 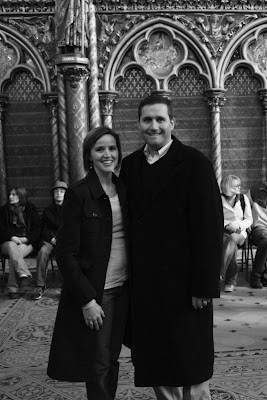 Just across the way from Sainte Chapelle was Notre Dame. The granddaddy of ’em all, in Paris. We were able to go to confession here with a sweet French priest who spoke fantastic English. He was so kind and complimentary of Texas and encouraged Scott and I to take time to just “be present” in the church. That we did. Oh, and Shannon, thank you for the tripod tip. It made many a dark, gothic church turn out beautifully in the photos. 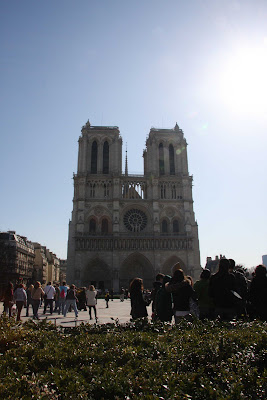 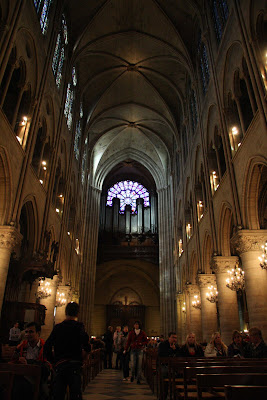 Every vacation must have a self-portrait, no? 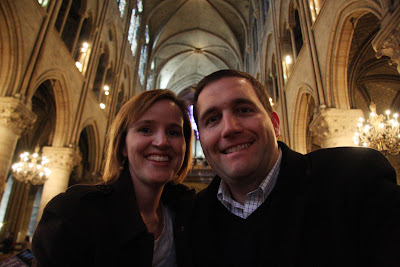 We grabbed a nice, little lunch of panne and fromage (bread and cheese) in a little side cafe and people watched. That was really fun. Then, we headed over to infamous Rue de Bac. One of the churches we wanted to visit was closed for restoration until Palm Sunday. Bummer. But, we did manage to make it to St. Vincent de Paul. Don’t freak out, that’s not really him on top of the casket, just a wax replica. His remains are buried in the casket below. It was a really sweet church and I fell in love with this stained glass window. 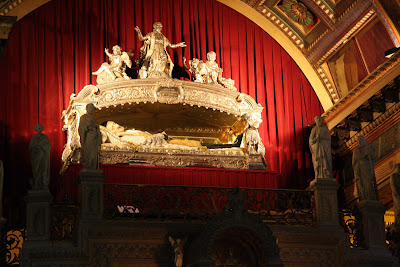 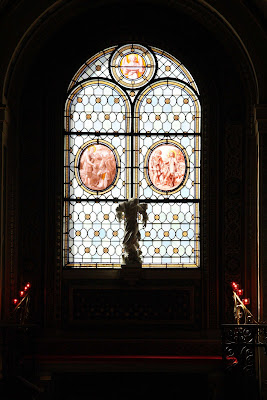 We had a magnificent day and it just got prettier as the day progressed. The original plan was to head to the Musee d’Orsay, home of a tubload of Impressionist works. But after we stood in line, the ticket agent informed us that the impressionist wings were closed. Um…ok? Plan B. The Louvre. But before we did the whirlwind tour, we decided to just chill on the grass at the Jardin des Tuileries, Paris’ most central garden. The sun was shining, the wind had died down and we enjoyed some M&M’s. What says love more than sharing your only package of chocolate? 🙂
I have to say, the Louvre surprised me the most. I came in with low expectations and was totally wowed by what we saw. The Mona Lisa – eh – it was nice.
I was much more mesmerized by THIS…the “Wedding Feast at Cana.” Take a look at the bottom right corner, see that guy standing there? This thing was massive. You Louvre groupies can have your Mona Lisa, I’ll take this painting any day of the week.
Number 2 of the “Big Three” – the Venus de Milo. Again, impressive, but not nearly as hold the phones as what I saw next.
The Winged Victory. Most certainly my favorite piece of art in all of Paris. Is that space just made for it, or what?
All that art gawking and picture taking wore us out, so we strolled down the Avenue des Champs-Elysses and happened upon this delish pastry shop, Laduree. Oh my, people. The delights here were not to be believed. We brought the kids back some macaroons, but saved the good stuff for ourselves. Aren’t we generous? Then, because we hadn’t had enough to eat, we grabbed a croissant from Paul (the restaurant, not the guy). But, we at least paid for ours. The lady who cut in front of me in line, just grabbed hers and ran. Crazy. 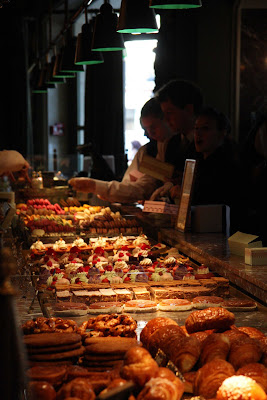 We did a little shopping and then heard sirens outside. We realized the police were clearing the streets and making way for a veterans parade, with the Arc de Triomphe as the backdrop. What a fun surprise! 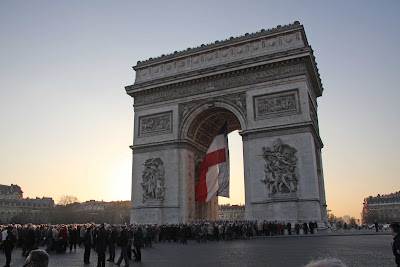 You knew it was coming…we saved the best for last on Thursday. Scott rounded the corner, saw the Eiffel Tower and exclaimed, “Now THAT’S Paris!” There is no more perfect way to end the day than by spending it with the love of your life in the world’s most romantic city. We snapped some pictures, stood in line and made our way to the second landing. We were even atop the tower when the light show came on. The Eiffel Tower was just as beautiful as we imagined, but even more romantic.

We ended the night at a little restaurant recommended by some friends from France. Scott and I both gave it a run for a tie for the #1 meal in France. I think we got there at 9 and left around 11! What a fun, fantastically wonderful day. If you wondered if you can see Paris in a day, the answer is yes 🙂 We so enjoyed our time together, especially on this day.