Today, we opened our eyes to this beaut…Mont St. Michel. This Benedictine Abbey (a prison at one time) sits on the northern coast of France on the English Channel. We were there during low tide, where the waves go out a full 9 miles before coming back in during high tide. It was a little chilly, but that made for some gorgeous blue skies. Our walk took us up, and up and up. I’m telling you, the stairmaster ain’t got nothing on the Mont. I seriously thought I might need an oxygen tank. 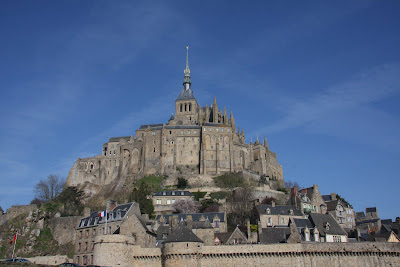 Believe it or not, this thing has been around (although it started out significantly smaller and was added to over the years) in the 6th century. Hello? That’s old. This is a little background on its beginnings:

“Before the construction of the first monastic establishment in the 8th century, the island was called Mont Tombe. According to legend, the archangel Michael appeared to St. Aubert, bishop of Avranches, in 708 and instructed him to build a church on the rocky islet. But Aubert repeatedly ignored the angel’s instruction until Michael burned a hole in the bishop’s skull with his finger. That did the trick. The dedication to St Michael occurred on October 16, 708.” 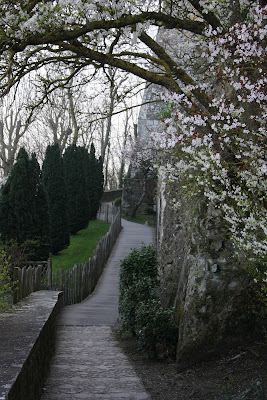 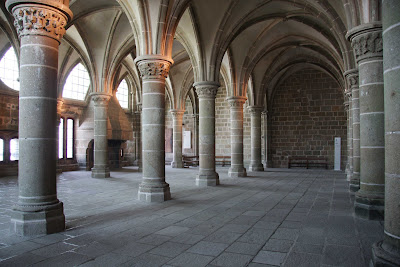 Low tide – can you believe how far we could see? 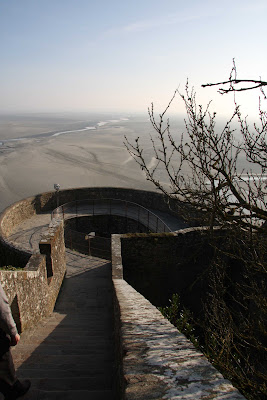 I’ll admit, going to northern France was all Scott’s doing. He saw a photo of this place in one of our travel books and insisted we go. I was a wee bit skeptical only because it took about a 4-hour car ride with lovely Jane. Totally worth it. Scott was right – did you get that honey? We packed our bags, hauled them back down the mountain to our little Polka Dot and headed off to Pointe du Hoc and Omaha Beach to relive “the longest day.” On our way, we had to pull over and snap this photo. Hey, what can I say? We’re Aggies, like real Aggies with our agriculture degrees. We loved comparing the countryside, the wheat fields, the dairy farms and the cattle breeds to the states. On our drives around France, we were struck by how much of the country is just that – France has its big cities, but it’s largely an agricultural country with some breathtaking views. 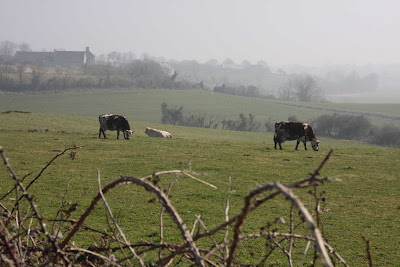 After we got our agriculture fix, we arrived at the Normandy beaches, specifically Pointe du Hoc. This place had some special meaning to Scott and I. A certain Colonel, James Earl Rudder (a mighty fine figure at Texas A&M), and his troops played a key role on D-Day. Here’s some history…
The Allied bombardment of Pointe-du-Hoc had begun weeks before D-Day. Heavy bombers from the U.S. Eighth Air Force and British Bomber Command had repeatedly plastered the area, with a climax coming before dawn on June 6. Then the battleship Texas took up the action, sending dozens of 14-inch shells into the position. Altogether, Pointe-du-Hoc got hit by more than ten kilotons of high explosives, the equivalent of the explosive power of the atomic bomb used at Hiroshima. Texas lifted her fire at 0630, the moment the rangers were scheduled to touch down. Col. James Earl Rudder was in the lead boat. He was not supposed to be there. Lt. Gen. Clarence Huebner, CO of the 1st Division and in overall command at Omaha Beach, had forbidden Rudder to lead D, E, and F Companies of the 2nd Rangers into Pointe-du-Hoc, saying, “We’re not going to risk getting you knocked out in the first round.” “I’m sorry to have to disobey you, sir,” Rudder had replied, “but if I don’t take it, it may not go.”
For a second, folks, just look at those cliffs. They’re huge and about 60 years ago they were filled with men climbing up those walls, sacrificing their lives for people they didn’t know, but for a cause they believed in. I tear up everytime I look at these photos. Not just because of that sacrifice, but because of a fine man, my papa, Jack Dodson. He was a tail gunner in WWII and his unit made many key strikes in preparation for this day. The amount of pride I felt was indescribable. I love you Papa. 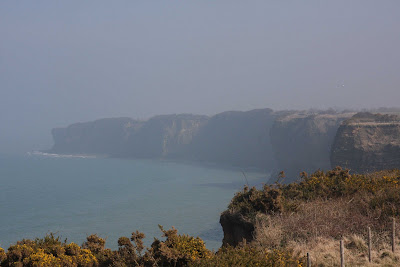 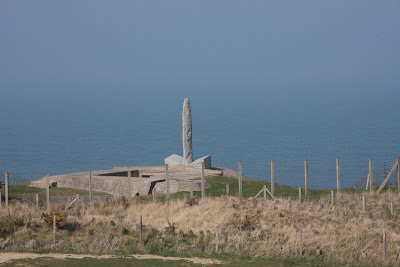 All those “holes” you see were filled with men and lots of guns, ready to strike all those men who actually made it up the cliffs. 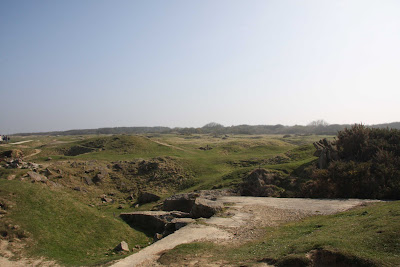 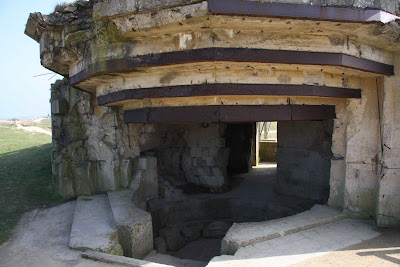 After an emotional moment at Pointe du Hoc, we headed to the U.S. Memorial. The gift of land was given to the U.S. by the French. It was an emotional and surreal day as we strolled through the cemetery and shed some tears. People keep saying, “I bet going to Normandy was amazing.” It was, but it was so much more than that. History became reality, stories became life and places became memorials. It was a day to remember and it was a day to be thankful. Omaha Beach
Originally a different name, but it was renamed “Omaha Beach” after its code name by U.S. and British forces. 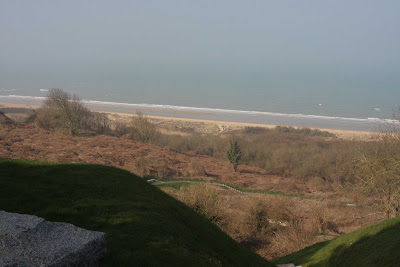 A pictorial view of the pre-emptive air strikes by forces prior to D-Day. 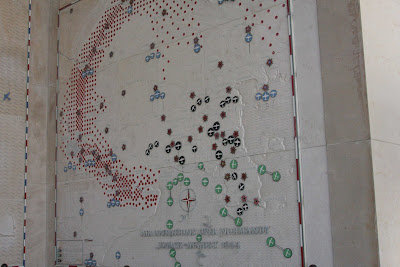 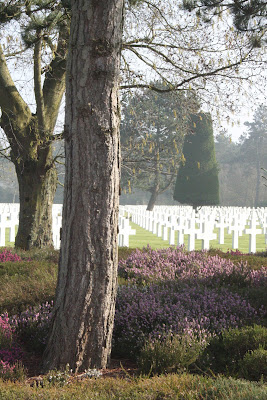 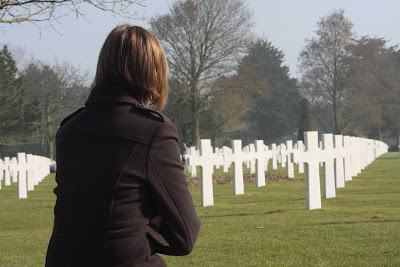 After our beautiful day in northern France, we hopped in the Polka Dot one last time and headed inward to busy, crazy, lovely Paris. Tomorrow, we meet the hotel maintenance staff, navigate the metro, witness a theft, dine on delish pastries, participate in a parade, head to confession in a special place and eat more filet de bouef. Bonjour!