The last few trips to San Antone have been just Scott and I. I think Luke joined us on the last one about 8 months ago. It’s been quite a while since we’ve loaded up the crew and headed south for an overnighter.

We left on Friday afternoon, just after golf camp concluded. About a half hour into the trip, we realized Luke needed a diaper change. No sooner had we taken him out of his seat, he threw up All. Over. The. Van. That was just a whole bucketful of fun. We got him cleaned up, changed and back in his seat. Then, we did the best we could with the van. Scott and I looked at each other with a “now what?” look – should we abandon ship or keep going? He just shrugged his shoulders and said, “Life’s about living.” So, we put the van in “D” and kept cruising.

I called my college roomie, Erin, and asked if we could borrow her washing machine before we met her and the fam for dinner. That’s what friends are for, right? After depositing our 50-cents at her doorstep and a nice batch of nasty, we trekked down to our hotel on the Riverwalk. Remind me again to think twice before going to SA during spring break. It was crazy nuts! But, our hotel room was fab. It was a suite with a ginormous bathroom and two TVs, so we were able to space everybody a good arm’s length apart. Thanks to my dad for scoring us such a great deal! 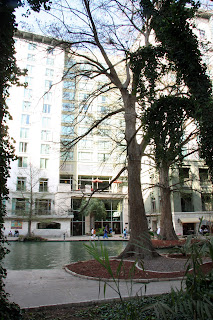 The kids were in Disneyland. They must’ve asked 10,000 questions about the room. Granted, it has been a long time since we stayed in a hotel. A good two and a half years. Trust me, when you have five kids, you don’t just trip over yourself booking an overnight room for seven. After the 10,001 question, I decided to give the grand tour. It went something like this…

K: This is the front door. Do NOT open it even if someone knocks. Do NOT go out unless you are with a parent. The brick on either side is, in fact, real, so please do not scratch on it like you did ours at home.

JP: Can we lock it?
ALG: What’s that tiny hole for?
K: This HUGE mirror to the right of the door is for looking at. Do not run behind it or trying punching it. It will break.

K: Focus people. This couch is a sleeper couch. It is awesome because it turns into a bed. But, if you jump on it enough it will break and then you have to sleep on the floor.

K: This TV is the kids’ TV. It has all the same channels as home, but they are not the same numbers. I do not know what they are. That’s why there’s a remote. Use it. These are drawers on the dresser. Please do not stow your favorite clothes/socks/toy/animal/random trinket because you will forget it’s there. Trust me.

W: Mom, look at all this food and water on the counter!!

K: Will, unless you value the money in your bank account, do not touch or eat that food. It costs more than you do. I’ve taken a picture and so has the hotel. If you eat anything they will know and they will charge us a bazillion dollars.

JP: {in shock} Really? {shrugs shoulders} Mom knows everything so you better not touch it.

K: This is the bathroom. All I ask is that you please refrain from peeing on the floor. 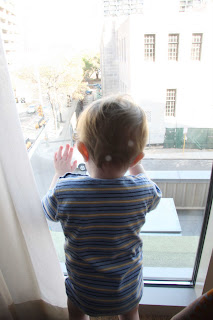 We finally finished the nickel tour, popped Luke in the stroller and took a walk along the River. I am always reminded of how much I love the Riverwalk after taking a stroll along its banks. Of course, I’m always reminded that one of my kids is likely to fall in at any given moment. We certainly kept a close eye on John Paul. It was great fun to see it on Friday, March 18, because one day earlier the City had dyed the river green in celebration of St. Patrick’s Day. How fun is that? 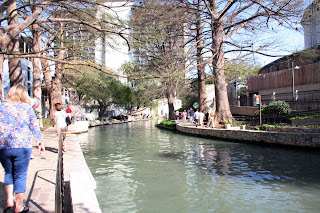 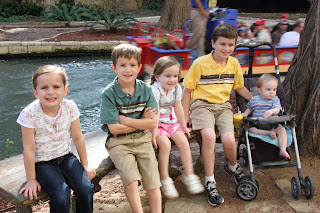 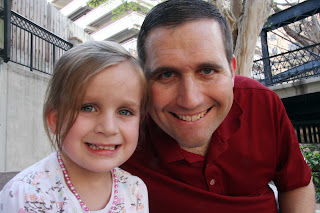 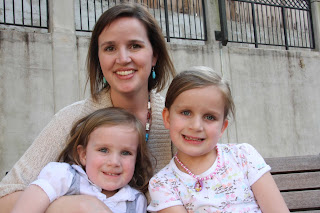 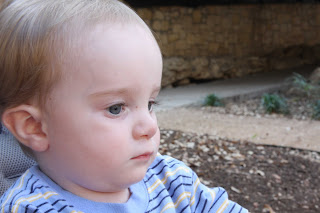 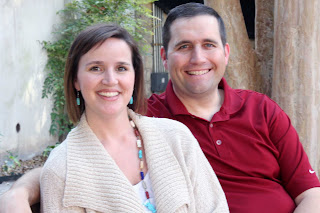 After a lovely dinner with our college friends, the Blake’s (how did we NOT get a picture of all of us??), we headed back to the hotel for some “sleep.” Really that is an oxymoron. Scott and I put everyone to bed one at a time, and then scored two lovely chairs just steps from our room, overlooking the lobby area and enjoyed that $5 cerveza. Worth every penny. At 3am, Luke decided to play until 5am. It was nothing short of a miracle that the other four kids slept through that party and managed to get a decent night’s rest.

After checking out of the hotel on Saturday morning, the Alamo was first on our ‘to-do’ list. Oh man. We totally forgot how nutso downtown SA is during the break. The line was ridiculously long, so we just snapped a few quick photos and grabbed some lunch. I promised Will we would return on a normal day and do the tour up right. In fourth and seventh grades, Texas History is taught and so this is a big year for him. In all honestly, he probably knows more than I do about our state this year! 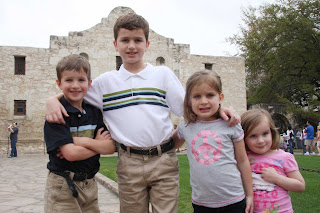 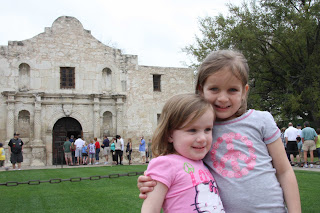 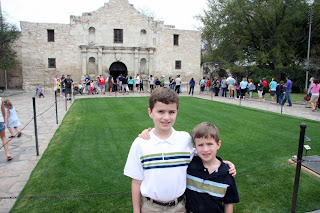 When we planned the trip, we completely spaced that it would be Lent. We traditionally give up eating out for these 40 days. That didn’t dawn on us until we were actually IN San Antonio. Sigh. Well, technically, we only ate out twice. And, we thoroughly enjoyed both meals. One at Tomatillos and the other at our infamous, Dough. During the Dough lunch, we learned that Guy Fieri from The Food Network, had been on-site just two weeks prior to film his show, “Diners, Drive-Ins and Dives”. Our sweet little hole in the wall is about to be a hub of business. For the record, we found it first. So there FN. The show airs April 11 if you want to DVR it.

We made it back in one piece with five very tired kids and two even more tired parents. But, it was a welcome reprieve to get out of Austin. We haven’t done that much as a family and it felt good to be free from the same ‘ol, same ‘ol.