The Tuesday before Thanksgiving (hold on to your comments, please) I loaded up the van with Christmas-dressed kids and we chatted with Santa Claus.  Why?  Because I H-A-T-E standing in lines waiting on anything.  Detest it.  Such a waste of valuable time.  And, I want my kids to actually have the opportunity to visit with SC instead of just snap the picture and hear, ‘next, please.’

We started going to see him earlier in the season a few years ago and it has been awesome.  Why did I never do that before?!  To be perfectly honest, my kids have no clue whether we’re visiting Santa during Advent or just before Thanksgiving.  And, even if they did, I’m pretty sure they could care less. 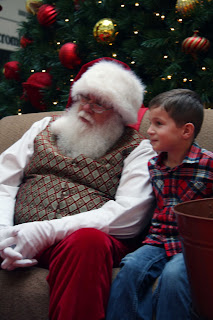 The rule at our house is one gift from Santa.  Although, we have encouraged them to give him a backup gift idea, just in case their favorite toy is um, unavailable, in Santa’s workshop.  In a world of overconsumption and more-more, we are desperately trying to buck the system and teach our children to be thankful.  In fact, a family saying around here is:  You get what you get and you don’t throw a fit.

Santa is a fun thing we do (yes, we have an Elf on the Shelf), but it’s certainly not the focus.  I don’t believe he’s evil or takes away from the spirit of Christmas.  He can.  But in our house, we work hard to make sure he adds TO the spirit.  It works for us and I wouldn’t have it any other way.

And, as a sidenote, you may not know that Santa actually hails from Texas, his winter home is in the North Pole.  Just look at his boots.  Another reason to love him 🙂 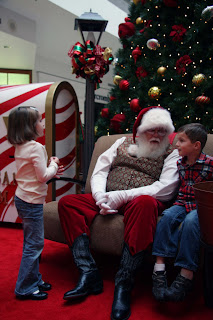 Poor Clare. She is really not a fan of boys – of any kind. The waiters at restaurants, Santa’s, babysitters, older brothers of friends. Nada. She only loves eight boys: her three brothers, dad, papa, the two uncles and great papa.﻿ If you’re not on that list, I guarantee you she will hide behind my leg. If said boy advances to give her a friendly high-five, she will start crying. Case in point. When we celebrated the Feast of St. Nick, she WIGGED OUT. She was terrified “that boy” was going to come in her room. I assured her, I would take him down if he did. Fortunately, I did not have to make good on my promise. 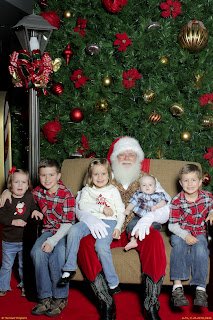 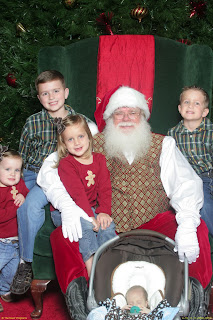 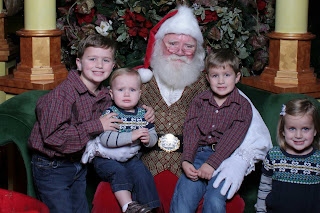 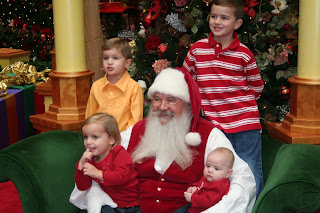 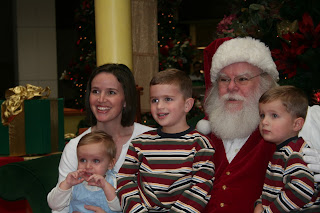 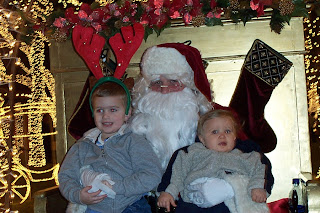