Wow.  We went on vacation over a month ago.  This is how crazy life is around here.  Here’s your recap of our really, REALLY amazing week in the mountains.  For the first and second parts of the trip, click here and here.  Might want to grab that Dr Pepper and settle in.  Just sayin.

Ok, where were we?

Our 14th wedding anniversary was spent with the people we love most in the world – each other and our children – and we wouldn’t have it any other way. I’m sure there were more exotic locations or fancier venues to celebrate the big 1-4, but this year we were just where God wanted us to be…with each other.

If it’s possible to be up an earlier than the prior day, we were. 0430. That’s just ridiculously early in my book. But, it did give us an early jump on the day. By 7:30, we had everybody fed and bathed, we had picked up the house and were wheels up, on our way to Alamogordo and White Sands National Monument. If you’ve never been or heard of this place, it’s totally worth the drive. Once upon a time, a long, long time ago, Scott and I visited White Sands. We were in college and it was cool then, too! We rented a sled – this would be our Randy Quaid National Lampoon’s moment. As we sat sledding down that white gypsum, I had flashes of him telling Clark about the plastic plate in his head. The kids (big and little) had so much fun we didn’t know what to do with ourselves. Because we were the first ones in the park, no lie, we had our pick of the best sledding spots. I would like to point out that Will and Scott did manage to “bite it”, but in a graceful, funny sort of way. I however, was an expert sledder. And, really, who will contradict me? My blog. My version. 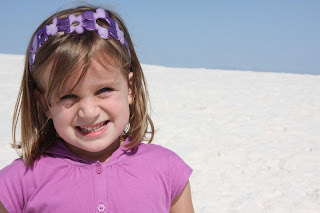 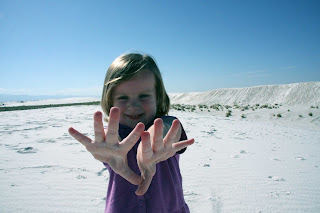 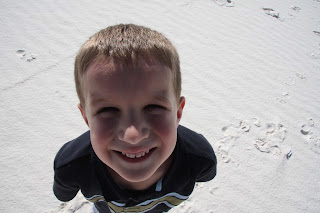 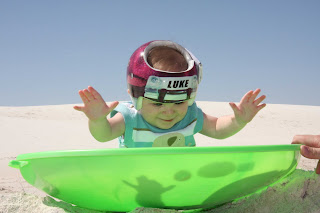 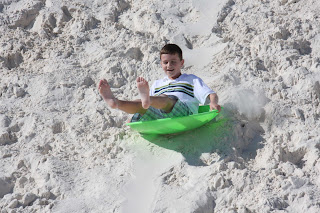 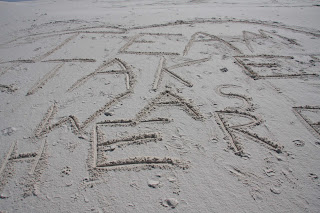 We enjoyed lunch at a downtown park, then headed to the NM Museum of Space History, which houses the International Space Hall of Fame. Yes, there really is one and it’s in the middle of nowhere in Eastern NM 🙂 The museum had this great interactive exhibit that allowed you to guide the shuttle to a landing. We all faired so poorly that the automated pilot even ran out of encouraging words and instead just said, “Well, be sure to come back next time. Please let someone else give it a try.” Thanks for the pick-me-up. The kids all agreed the highlight was trying out the “whisper dish” out on the front lawn of the museum. 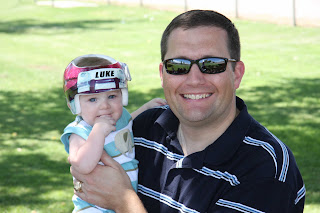 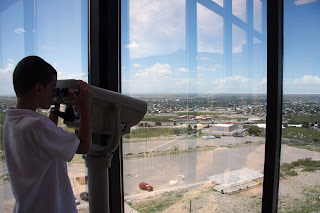 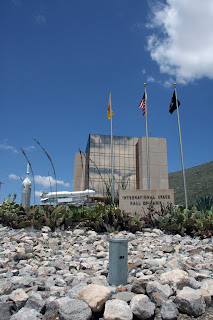 On our way home, we stopped at St. Francis de Paula Catholic Church, one of NM’s oldest missions, built in 1869. It was quiet and simple and very peaceful. Just as we were leaving, I caught a glimpse of Clare, settled on the kneeler looking sweetly up at Mary. Very precious. 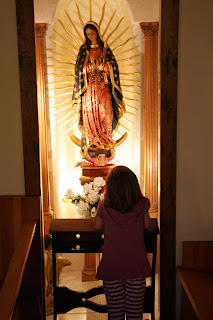 Then, a final stop at the Mescalero Indian Reservation’s church, St. Joseph, made for a full, yet awesome day. The bats evidently live in the rafters. I realized this about halfway up toward the altar. Ewww. While the restoration was lovely, I can’t say I’m a fan of a church that has bats that live in the rafters. 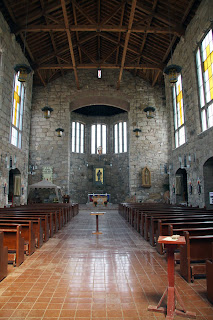 I’d like to say that we were able to get all the kids in bed and enjoy a glass of wine to toast our anniversary. But, it wasn’t meant to be. It was, by far, Luke’s worst night of sleeping and we were up most of the night while he screamed. The good news is that we’ve learned to lower our expecations. We went into vacation not expecting him to sleep at all, but he surprised us all by only have only really lousy night. That’s a success in my book.

WEDNESDAY, JULY 28
We had high hopes that the much-advertised Inn of the Mountain Gods in Ruidoso would be fab.  Notsomuch. 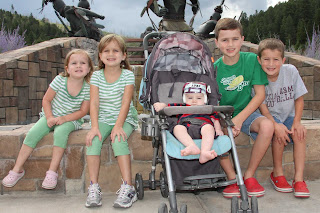 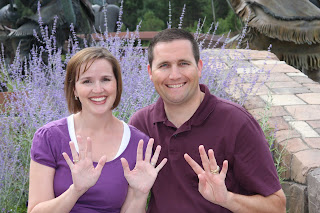 (The anniversary photo…how many fingers do you count?  Will took this and I thought he did great!)

We just took a few scenery pics and on the way back to the house got pelted with hail.  It was a good thing we didn’t go far today!  It rained like crazy all afternoon.  We ate an early dinner and then scooted out just as the rain broke and enjoyed a lively game of bowling in downtown Ruidoso.  We even ran into some people from Jacksboro, just a hop, skip and a jump from Scott’s hometown.  That was fun.

THURSDAY, JULY 29
We got an early start (again) to the day and loaded up the troops to check out Area 51 in Roswell.  I kept looking for Will Smith.  Weird.  Roswell is a funny, funny little town.  They really own the whole “a UFO landed here” bit.  Everything from the Mickey D’s, to the street lamps, to the car dealerships boast of this newsworthy headline.  Scott and I thought it was a little hokey, but the kids…  They’re still talking about what a cool place Roswell was.  I suspect this will be one we’ll laugh about in about 10 years. 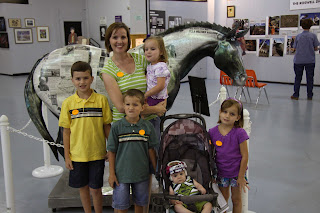 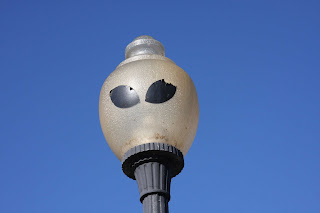 After lunch at yet another park (this one was pretty awesome, by the way, it had a free zoo!) we headed north to Lincoln.  It’s like the last western town and the place where Billy the Kid escaped from jail.  I’m sure it would’ve been cool if it weren’t RAINING LIKE CRAZINESS.  We mostly just waved to the jail and kept heading north to Capitan.  What’s there, you ask?  Smokey the Bear National Park!

I won’t bore you with the whole story, but there really was a Smokey the Bear and he’s buried here.  This was such a fun, unexpected find.  We were really starting to think the rain had ruined the day, and then we stumbled upon this gem.  Say it with me…”Only YOU can prevent forest fires.”  Ad money well spent.

FRIDAY, JULY 30
Get out a hanky, this was our last day.  I think this is the point in the vacation where you’re stoked that you went but whacked out because you want your bed, your house, your washing machine, your stuff.  We went out on a bang, I’d say. 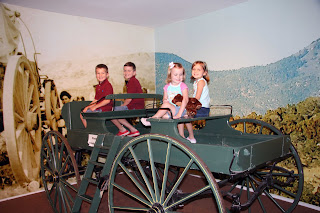 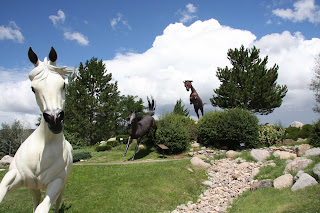 Ruidoso Downs, the horse track, has an adjacent museum where we spent the better part of the morning.  They had this fantastic kids’ pretend play area.  And, since we were up at the crack of dawn, we had the whole place to ourselves.  Perk to being on central time in a mountain time zone, I guess.  After lunch and naps at the house, we headed back to the Downs for a little gambling.  Never too early to start the kids, huh?  Actually, they had no idea that people were actually putting down cash for the races, they were just jumping out of their skin because they got to be so close.  It was awesome!  I even had a chance to call my grandfather – the horse race king 🙂 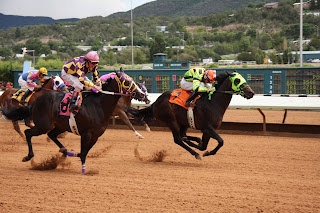 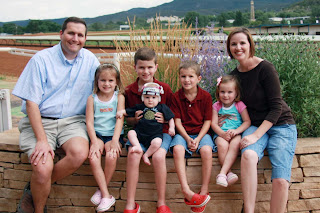 We ended the day with a really, really long walk to find ice cream.  Instead, we found a necklace.  We…me 🙂  And, perhaps a thing or two for the girls.  We packed, washed a bazillion loads of laundry and got a decent night’s rest.

SATURDAY, JULY 31
Of course the kids slept in, but we managed to hit the road at 6:45 NM time (7:45 TX) and put the pedal to the medal.  I think the kids watched like seven movies, but since we didn’t watch a lick of TV throughout the week, I figured it wouldn’t hurt.  And, we made great time.  We clocked it right at 11 hours and 45 minutes.

What a week.  We made some sweet memories.  The kids acted like usual and had some timeouts.  They giggled, played games and got creative.  We cooked and ate every meal together as a family.  We shared some good conversation.  We read a boatload of Harry Potter.  We took a ton of photos.  We didn’t sleep a lick.  We shared some wine.  And a few kisses.

We are so grateful to Dominic and his family for letting us stay at their house.  Team Whitaker needed to escape and just “be”.  That was a tremendous gift.