Such a slacker.  I just feel like we’ve been running 90 to nothing since we got home from vacation, yet, as I look around at my house, it shows no sign of any progress.

Ok, back to the story.  The night before we left we celebrated my brother’s 29th (no really) birthday.  Clare was just getting over a “fever of unknown origin” and Luke’s sleeping was still shaky, at best.  Perfect ingredients for a 12-hour road trip, right?  We had grand plans of leaving at 7:00am on Saturday morning, but we FINALLY pulled out of the driveway at 8:23.  And then at 8:35am, we realized we’d left our garage door wide open.  A text to our next door neighbor and a pretty fantastic leap of hers over the garage sensors later and we were off.

Oh, I forgot to mention that John Paul woke up with a fever.  It was pretty much like the point of no return.  The suitcases were all packed, the food iced down and plans made.  We just punted, gave him some ibuprofen and prayed for the best.  A mere 47 miles into the trip, we hear a “Mom, I need to throw up!” from the backseat.  I literally flew to John Paul, screamed at Scott to give me something to catch the throw up…and again we punted as I held my hands for him to deposit his um…stuff.  Thankfully, he didn’t want to eat breakfast, so it was all orange ibuprofen.  I had to wait another 23 minutes (yes I was counting) until I could wash my hands.  Awesome.

So, if you’re doing your math, just 47 miles into the trip, we had stopped three times.  During the throw-up stop, Clare was attacked by fire ants.  When we stopped for an early lunch, we were attacked – for reals – by no less than 30 flies.  It took us an hour to get them all out of the car. 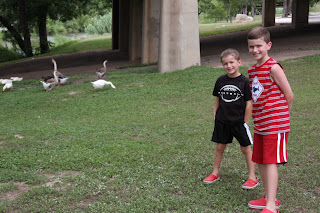 Things settled down a bit for a riveting game of car bingo.  And, we saw a spectacular show of wind turbines.  Now, remember, I’m a Panhandle girl.  I know wind.  These things were awesome and the kids loved watching them.  Sorry the iPhone pic doesn’t do them justice. 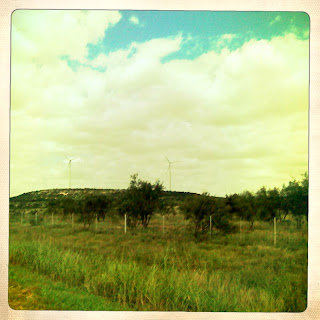 We ran into my cousin, Lauren, who lives in CANYON, at a dumpy DQ in LAMESA.  What are the odds of that? 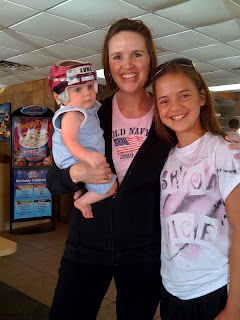 Fifteen miles later we realized we were heading the wrong way on the right highway, then we hit a hail storm two hours outside of our final destination, Ruidoso.  Upon our arrival, the smoke alarm was beeping every 10 seconds and it was 18-feet up on the ceiling.  As fate would have it, one of my dad’s high school friends owns a home that was three houses down from ours and he arrived with an extension ladder and a major dose of sanity.
And that…is day one.

Day two was spent chilling out.  I worked on getting Luke to take a nap – which he miraculously did – and getting John Paul’s fever under control.  Scott took everyone else to Mass.  I don’t know what prayers he offered up, but it was nothing but blue skies the rest of the week.  I show this photo to tell you about our glorious morning ritual.  Our house (huge hat tip to Dominic’s family for letting us crash at their family’s vacation home in Ruidoso) had a player piano.  So, every morning we cranked the classical music and dined in style.  We felt like we were at a resort! 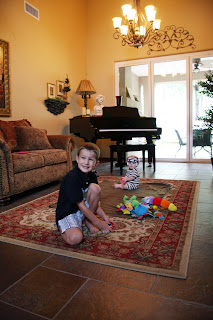 Stay tuned for the story behind Will’s new nickname, “Downhill” and how a golf ball was the highlight of the day.