Skip to content
FacebookPinterestYoutubeInstagramRssEmail
ORDER MY BOOK NOW!
Really, that title is more for me than anybody else.
I was WELL on my way to feeling overwhelmed earlier in the week.  Then, I got my dose of “seriously?” and I’ve checked my attitude at the door, so to speak.  Let me explain.
Earlier this week, I shared the news about ALG undergoing day surgery in a few weeks.  On Tuesday, Luke had a doctor’s appointment with the plagio clinic (plagiocephaly, i.e. flat spot on the back of his head) and we learned that he’s a borderline candidate for a doc band.  After a quick consult with his neurosurgeon, everyone decided he was a definite candidate and we’ll get his measurements on Friday, and a helmet in about two weeks.  Add in the fact that close to zero of my clothes fit, we’re still not getting super great rest, the last week of school crazy, too many sibling fights and I just lost it.  Well, not a total meltdown.  But, the slow flowing tears that bunch up in your eyes kind of meltdown.  It just felt like the “one more thing” list was getting longer.  And longer.  Summertime was looking more stressful instead of fun and relaxing.
We stopped by Scott’s office on Tuesday after the visit, I gave him a quick hug before he had to head in for a meeting and then I briefly visited with the Dominican Sisters.  They are so kind and give the best hugs.  I am grateful for their presence and their friendship.
Fast forward to Tuesday evening and I get a text from a friend who has a son, same age as Luke with many of the same challenges, and it appeared he had a bowel obstruction.  (He ended up having emergency surgery yesterday afternoon and is currently residing in Dell’s PICU).  I went up to the PICU last night to see both of them and I had serious flashbacks to Luke’s prior stays.
It’s been an emotional and draining last couple of weeks.
But, there were some moments that caused me to give pause this week.  They made me realize – yet again – that God is at work if I’m smart enough to open my eyes and see His presence.  I’m not sure about you, but I have my life plan all scripted out.  Well, maybe not totally scripted out, but I have a pretty good working copy which I’ve shared with God.  Funny how He just laughs and files it under “You’re one crazy lady” in his filing cabinet.  I’m pretty sure I’m in good company in that file drawer.  Raise those hands, people, I know I’m not alone.
There was the meeting with the Physician’s Assistant at the Plagio Clinic…
Larry, whom I’ve seen at Dell numerous times, walked in and immediately made me feel like Luke was a rockstar.  He even loved on Clare, who was with me, and got her giggling lickety-split.  #1:  It reminded me that just about every one of the pediatric specialists we meet 100% love kids.  Yea for that.  #2:  What he said next, made me stop in my tracks.  We all know that Luke is Superman, right?  Necrotizing enterocolitis, that nasty intestinal infection he got at nine-days-old, is the third ring of hell.  After reviewing Luke’s chart and commenting on how alert and attentive Luke was, he busted out with, “Wow, he looks great for a kid that had NEC.  I mean, most of our NEC kids don’t look nearly as good as he does.  Well, at least the ones that make it out of the NICU anyway.”

“…most of the ones that make it out of the NICU…”  When I tell you that it is miraculous that Luke is alive, it is.  Morbidity rate for surgical NEC is 80%.  When I tell you that even though Scott and I are bone tired, we never tire of holding Luke in the middle of the night as he calms himself back to sleep.  When I tell you that Luke’s brush with death was as close as one can come, I mean it.  Scott and I stood at his bedside in the NICU on that busy Monday morning, September 28, and I will never, as long as the Earth calls me a resident, forget that feeling of helplessness.  Luke continues to defy the odds.  I have no idea how, but I do know the why.  He has something to share with the world.  And while he relies on us to tell his story for him, I know that when the time is right, he will take over the storytelling for us.
An appeal email from the Mother’s Milk Bank…
Dear Barbara,
Did you know? More than 13% of babies born “Native Texans” arrive prematurely and face serious health complications including necrotizing enterocolitis (NEC), a devastating and sometimes fatal intestinal infection.
Research shows that every $1 spent on donor milk for premature infants can yield $11 to $37 in cost savings, because of reduced complications and need for medical treatment. The use of donor human milk instead of formula means the baby goes home sooner with fewer medical issues and lower medical bills and stays healthier.

“…a devastating and sometimes fatal intestinal infection.”  I had to re-read that sentence about ten times.  It made me wonder if I will ever not have the flashback of sending Luke off to surgery.  Probably not.

A conversation with our priest…

Scott had coffee and breakfast with our parish priest this week and he shared something with us that he’s been holding onto for quite some time.  He was worried about how we might react.  Shortly after Luke’s birth, another couple in our parish gave birth to twins.  One survived, one didn’t.  The one twin died of NEC.  He was there when the parents received the news and stayed with them the entire day as they held their baby and said their goodbyes.  “One of the hardest days of my life as a priest,” he said.  Babies die everyday in the NICU.  It is a harsh reality.  There are days when I have guilt wondering why Luke was allowed to live while another mom mourns.  I don’t have the answer, but I find solace and peace in celebrating Luke’s life and praying for those parents.  Usually, I offer up those prayers in the wee hours of the morning.  I suspect that’s when they might feel most alone.
During our therapy session with ECI…
Luke does have some moderately concerning developmental delays.  But I know that every hour, every day that we spend working with him will allow him to master the milestones and play some catch up.
And, there was the birthday party for a friend…
After introducing myself and the kids (the four older ones were with me), I got the, ‘Oh, you’re Luke’s mom. I read your blog!’  Somebody is always watching, always listening.  Shame on me if all they see is me complaining.  Life is to be celebrated.  We all have our bad days, but overall, make it a glass full kind of life.  At least that’s my two-cents worth.
You know, the funny thing in all of this is that I believe ignorance is bliss.  Nobody told me that NEC could be so devastating.  Nobody told me delays were probable.  Nobody said it would be an uphill battle.  We haven’t really treated Luke like a china doll, keeping the kids away from him.  We’ve encouraged him to eat, to roll over, to play.  He’s been pushed a little too hard by a sibling, drooled on by a big sister, sung to by a brother, loved on by us.  We’ve just always loved him and set high goals working hard to get him there.  If someone had told me all of the challenges early on, I might’ve put limitations on Luke.
Thank the good Lord we didn’t.  Because limitations bite.  They strangle the hope.  They cut off the joy.  They stifle the happiness.
Now faith.  Well, that’s worth believing.  Just take a look at Luke… 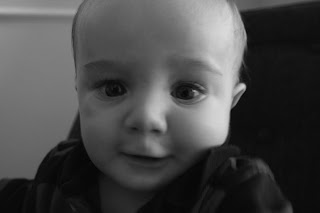 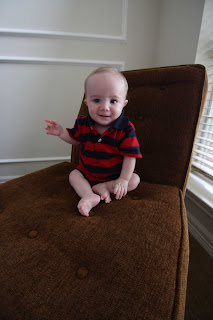