For weeks, I scoured cyberspace in search of some really cute sibling shirts.  I didn’t want something from Target (although, I do love me a good Target find), but rather something that was a keepsake for the kids.  And, I didn’t want it to cost an arm and a leg.  I stumbled upon Zoey’s Attic and immediately fell in love.  When I called the owner, Erin, she was so gracious and helpful.  And, she scored big points for not saying, “Oh my goodness, FIVE shirts!”  Nope, she just said, “I’m so excited for you.” 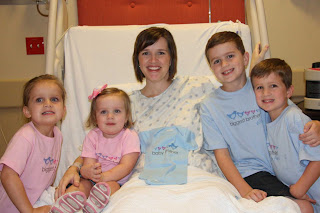 We’ve worn them many, many times. But, I wasn’t able to get the five kids together until a couple of weeks ago.  I can’t even begin to tell you how much it broke my heart not to have all the kids greet Luke for the first time in them, and for us to capture it on film.  Shoot, he didn’t even fit into the “newborn” onesie until he was nearly 5 months old!  Now that I type that it seems so silly.  I mean, really.  They’re shirts for goodness sake.  For me, I think it was more the symbolism, the principle.  It was just the fact that we had to admit that all was not ‘normal.’  Basically, I was avoiding reality.  Eh, we all get a pass sometimes, right? 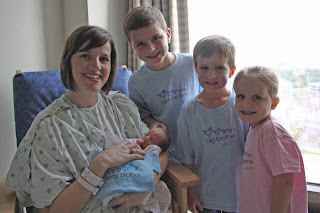 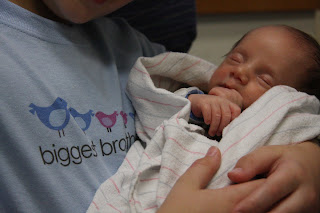 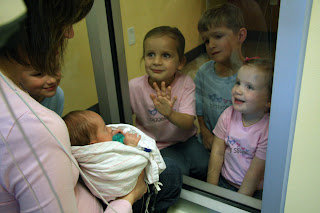 I think what it came down to is simple.  After seeing Luke get so sick, I think I was just afraid that if something happened, we wouldn’t have a family picture with Luke.  And that meant a great deal to me.  I’d carried him for eight months in my belly and now that he was “here” we had no proof that we had blossomed into a family of seven.  We were disjointed, in different zip codes, just trying to survive.

So, when I share this photo with you, it’s a bit of a milestone (even though Luke is clearly irritated!)…for many reasons. 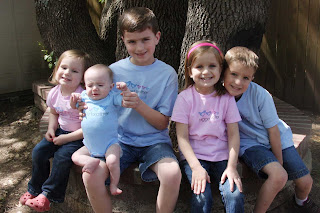