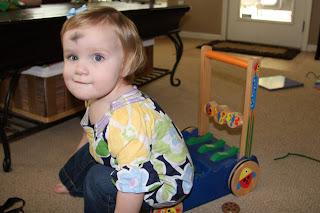 A few of my friends posted on facebook recently that they don’t celebrate Lent…and that got me thinking.  About a lot of things actually.

#1  Is Lent actually a holiday to celebrate?  After some thinking, I think it is.  What’s not to celebrate as we prepare our hearts for Easter?

#2  Lent isn’t an all-exclusive Catholic holiday.  Shoot, when Scott and I started dating, my Protestant self fell in love with the 40 days of preparation.  Quite frankly, I wish more Protestant churches urged their congregations to take part in the 40 days of Lent.  For me personally and in my marriage, it’s been an incredibly fulfilling time.

#3  Just because Hallmark doesn’t have a card for it and Wal-Mart doesn’t post any Lenten sales doesn’t mean it isn’t worthwhile 🙂  It’s quite nice to enjoy a holiday without all the ads on tv.  It’s a peaceful time of year and I really love that about Lent.

So, in honor of my most favorite time of year, I’m offering this week’s top ten ways to make Lent more meaningful this year.  Too often we hear about Catholics giving up alcohol, cokes or sweets.  Don’t get me wrong, those are all good things to give up.  But is that it?  I mean, is it really a challenge?  For some, I’m sure it is.  For most, it’s a cop out.  Sorry, I’m just writing what I feel 🙂  It’s not just about what we give up, but how we change during these 40 days.  Just ask yourself this question about your Lenten sacrifice on Day 40…have you changed for the better or are you just the same?  Did you give it up just to restart the habit again on Easter Sunday?  Would God recognize the difference or are you just going through the motions?

The 40 days of preparation should be focused on prayer, fasting and almsgiving.  Prayer doesn’t always mean being quiet in the presence of Jesus (although it most certainly can be), fasting isn’t just about the food and almsgiving isn’t just writing a check to your favorite charities.  I’m talking about real sacrifice.  Real commitment.  Real relationship.  Here goes some things we have done or may do again this Lent here at Casa Whitaker…

1.  FAST from eating out.  And, for us that means no Sonic Fridays 🙁

2.  FAST from making other people work on a Sunday.  Don’t fill up your car, make that quick trip to Lowe’s, take in a movie, eat at the Double Dave’s buffet.  Nada.

3.  FAST from judging others.  Yikes.  I’m hitting where it hurts now.

4.  FAST from junk food and eat 3 servings of fruits and veggies a day.  This one is totally on me.  The kids and Scott are awesome about eating their fruits and veggies.  Me?  Notsomuch.  I’m lucky to drink a glass of juice in the morning.

5.  PRAY for those who’s company you’d rather do without.

6.  PRAY weekly Stations of the Cross on Fridays.  For us, that means we’ll do our very best to make one of these services as a family during Lent.  For the other Friday’s, we’ll likely do a shortened version in our living room with the kids.

7.  PRAY at a daily Mass once a week.  Scott gets to do this at work everyday, but it’s a bigger chore with me and the kids.  I’m gonna give it a whirl though.

8.  Participate in a family SERVICE PROJECT, like restocking some shelves at the Capital Area Food Bank.  Or, take the money you would’ve spent eating out and DONATE it to a charity like Mobile Loaves & Fishes.

10.  Have each child gather up three toys (in our house that’s a whopping 15!) and DONATE them to Goodwill.

Those are just a few and I know many families that do some awesome things during these 40 days – as an individual, as a couple and as a family.  Whatever you do, make it count.  Or – as my favorite motto says – go big or go home.

Posted in Uncategorized and tagged catholic, lent
← PerspectiveCalling all superheros! →