Oh finally – the birthday boy got his party!!

If you’ll recall, John Paul’s BIG day was put on the backburner due to Luke’s unexpected hospital stay and a nasty case of strep throat inflicted upon the birthday boy himself.

We went small this year (hoo-rah for that brilliant idea) and for once, I didn’t go all out.  I mean, I went all out, but not ALL out…as I’ve done a time or two.  Ahem.

Anyhoodle, we had a fantastic time.  The superheros arrived right on schedule.  They colored, created a Superman shield, watched some Batman movies, played a little Lego Batman on the Wii, ate some cake, opened some presents and went home.  We did have a minor meltdown by said cute 6-year-old over some “level” of the Wii game he didn’t get to play, but after Uncle Daniel came to the rescue with some laughs, all was right with the world.

Speaking of Uncle Daniel, he did a superb job of shooting pics.  Bro, I’ve got you covered at Ava’s party.  Niece Ava experienced her first Whitaker birthday bash – and more importantly, she survived.  Aunt Amanda, thanks for braving the crazy and coming.  We got some special phone calls from Uncle Cory, Granny and Godfather Vince.  Although, I’m not sure how much John Paul actually listened to the well wishes.  He was too excited.

I was left at the end of the party thinking…how in the HECK did John Paul get to be six?  SIX!  He will be a first grader next year.  A bona fide school age kiddo.  And then I cried.  Hormones still.  But the tears dried up when the kids started arguing – again – and I wished for the 18th birthday celebration instead.  I have no doubt it will be upon us sooner than we’d like.

Without further chit-chat, here’s the proof of the fun we had.  HAPPY BIRTHDAY JOHN PAUL!! 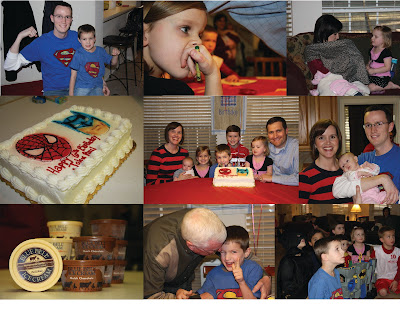