Skip to content
FacebookPinterestYoutubeInstagramRssEmail
ORDER MY BOOK NOW!
It’s all fun and games until somebody gets stitches.
Yes, during the family outing to Mel’s (which is a super fun bowling alley, by the way), we only made it through a bowling game before crazy waltzed right back into the family.
Something about two brothers, racing to put up bowling balls, smacking into each other and John Paul’s chin hit the bowling ball. Smack. Yowza, that’s a lot of blood. Scott was right behind them and saw it happen in slo mo – been there, done that. Amazingly, as soon as I saw the blood, I shifted into calm Mom mode – for you non-parentals, it’s a gift God bestows upon you during delivery. Don’t ask, just be thankful. The sweet manager offered bandaids, but one look at that gash and I knew we were destined for the ER. Shoot, I left the “10th visit free punchcard” at home.
As an aside, I could totally picture the guardian angel dispatcher having this conversation:
Dispatcher: “Um, we’re going to need double coverage on John Paul, in 3, 2, 1…”
Guardian Angel: “Code Red, Code Red, I need backup NOW!”
Hey, at least there were no smashed fingers, no broken teeth and no other siblings caught in the crossfire. We feel pretty fortunate that he escaped with just a busted chin.
Scott dropped John Paul and I off at the ER, then took the other three home to feed, bathe and put to bed (or as we often say, “wash ’em, dry ’em and put ’em up”). He was so incredibly brave and his usually chatty self once the bleeding subsided and the nurse brought a Spiderman coloring book. The doc confirmed my suspicions…stitches it was. Five, actually.
Aunt Amanda escorted us home and even stopped by Sonic for some ice cream for the injured passenger. John Paul is doing magnificently and doesn’t have much pain. He’s convinced the Spiderman influence is keeping the pain at bay. Hey, whatever works. We go back in on Wednesday to have them remove the stitches. So, until then, no water, no running and no rough housing. Yeah, that should be easy. 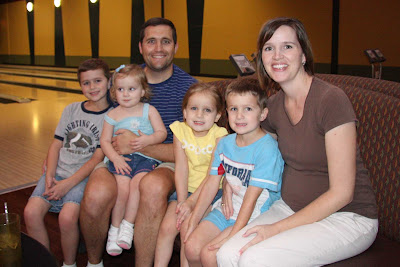 At least we were smart enough to take the family photo before said accident. However, I was not smart enough to sit on the other end so I don’t look ginormous… We’re off (to where, I don’t know) to enjoy the rest of Scott’s vacation with, and without, kids over the next few days. Plus, we have a pretty monumental anniversary coming up on Monday – lucky #13. I’ve got puh-lenty of QOTW fo keep you company tomorrow. Make it a great weekend…hopefully you’ll have better luck than us last night!