We decided to get off the Austin grid and do something a little different for John Paul’s birthday.  I mean, that’s certainly appropriate for him, isn’t it?!

We had a hunting/scavenger hunt theme party.  I immediately thought of Cabela’s and after several phone calls found out they did birthday parties.  It was definitely on the down lo.  They don’t really advertise, but a little perserverance paid off. 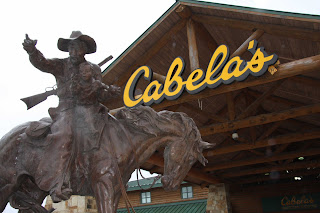 I was super happy to find an adorable collection of camo-designed party collaterals on Etsy.  That got my creativity going.  The party favor bags were really fun to put together.  A little water bottle, tricked out, a camo-decorated cookie, a camo notepad and a keychain that also doubles as a compass and thermometer.  Best $1.99 I spent for the entire party.  All the boys had them on their backpacks today at school. 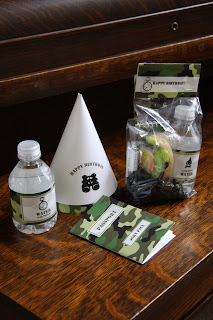 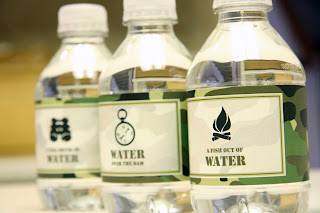 The boys arrived, many in camo gear, along with their dads.  I’m still not sure who was more excited, the 7yos or the 30-something Dads.  HA.  They took their handy passports I created with the questions Cabela’s gave me and they were off to the races.  It took them all over the store and they had a blast working together to get the answers.  The last clue brought them to the party room, where they collected their fish food and tokens to use at the shooting gallery.  Yes, it was all boy.  But, ALG and Clare were right there in the thick of things.  Not to be sideline sisters at all.

After a quick, but hopefully thorough, handwashing they all headed to the party room for pizza, singing and cookies.  All in all?  Success. 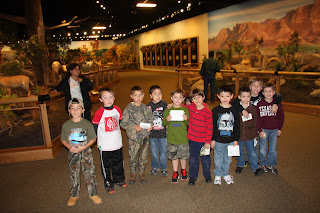 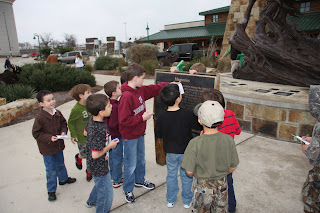 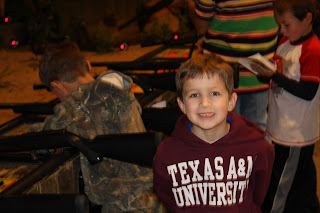 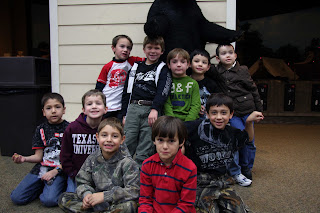 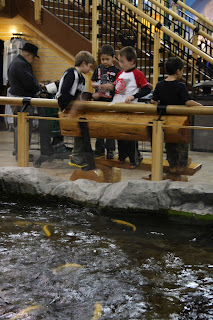 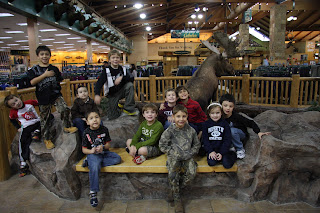 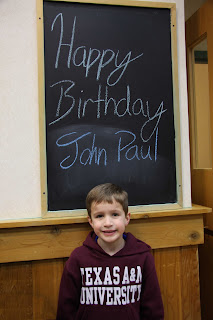 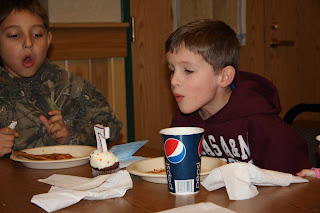 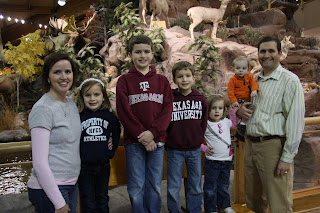 FUNNY HAHA #1
We had pitchers of drinks for the boys.  One cute partygoer, “T”, decided he was done with his lemonade.  But, instead of pouring it in the sink, he poured it into the FULL pitcher of lemonade and said, “Can I get some root beer instead?”  Thank the good Lord another Dad and I saw that and disposed of said contaminated beverage.  Boys. {insert heavy sigh with small smile here}

FUNNY HAHA #2
At the shooting gallery, each player had to insert two tokens to get the guns to “shoot”.  Don’t worry, it was infrared lighting and they were aiming at things like tin cans and doorways.  It did have pretty sweet sound effects.  {Note:  I am/was an NRA certified gun instructor, so I could hold my own with those boys.  Bet you didn’t know that little nugget about me 🙂  And here you thought I was Martha Stewart.  I’m ruining my image.}

I digress.  Ok, so the funny part of that story is one of the boys, “J”, started searching all the token trays from the guns that had already been used, hoping that a token had been kicked back.  Quite the entrepreneur, I’d say.  J ended up with like 15 extra tokens and all the boys were bartering their older sibling to get an extra token.  Heelarious.

FINAL FUNNY HAHA
Ok, so just a few hours after I dropped the invitations in the mail, I pick up the kids from school.  I am STOKED to share all the details with John Paul.  When I get to the “we’re having cookies instead of cake” part, his eyes light up and he says, “Oh, Mom can you get some Yoda and Darth Vader cookies?”

SCREECH.  What?!?!  I’ll save you the entire compromise conversation, but ultimately we struck a “deal.”  He got his Star Wars cookies for the basketball game snack and the class snack on Monday and I won camo cookies for the party.  Totally figures, right?  I get everything planned, signed, sealed and delivered and he decides he wants a totally different theme.