Yeah, I looked at the calendar.  While the beginning of the Easter season has passed, we’re still in the octave, so this post is totally legit.  Easter weekend was awesome.  The kids were out of school, Scott was off work (hey, perk for working for the church) and we were in need of some serious family time that did not involve a hospital.  God gave us our wish.

Thursday evening, Scott took the boys to Holy Thursday Mass.  He said the Mass was incredibly touching.  Fr. Danny washed 12 parishioners’ feet, but it was how he did it that was so moving.  As he washed each person’s feet, he told them how much he appreciated their service to the church and how their gifts were glorifying God.  We are so blessed to have priests like him.  Our Diocese, State, Country and World are full of men like him.  Praise God!

Friday morning, we headed to Dell Children’s as part of the family service project, and donated lots and lots of books to the library.  That was fun.  We enjoyed lunch with my parents and while we had high hopes of me going to Mass with the girls, everyone completely broke down.  In our wisdom, we opted to put everyone to bed early.  Good parenting move.

We continued the festivities on Saturday.  The Tucker’s and Fr. Dean came over for lunch (wow, Thomas, you outdid yourself on the creole) and we let the kids loose.  Basically, they just ran wild, but no one ended up bleeding so we considered it a perfect afternoon.  Oddly enough, Fr. Dean took off shortly after lunch.  Must’ve been the TEN kids that scared him off 🙂  Nah, we know you had to get ready for the Vigil…

We crashed for naps, laid out Easter clothes and rested up because we were crazy smart enough to avoid the crowds and attend 7:30AM Mass.  It was lovely.  Aunt Amanda, Uncle Daniel and cousin Ava joined us and the kids were amazingly good.  I think there were still in a somewhat sleep-induced state.  Whatever it was, me like.  When we arrived home, it appeared the Easter Bunny had visited and hidden their baskets.  He’s a sneaky one.  Let the sugar rush begin. 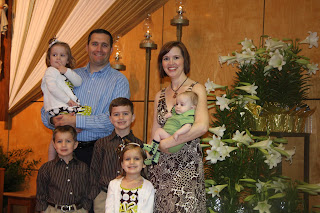 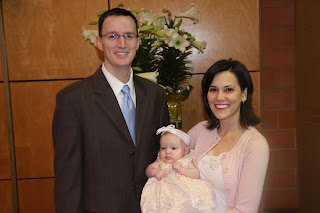 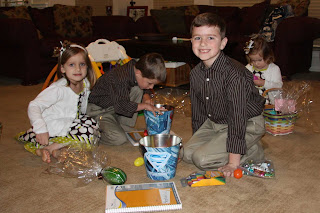 After scraping them off the ceiling, we loaded up the troops and headed to Riverplace to meet the Kerners (another family of 7) for brunch.  We had a blast, the mimosas were delish, the egg hunt plentiful and the conversation was so great.  Kerners…thank you for such a fun morning. 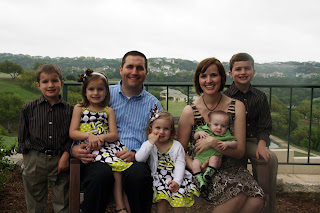 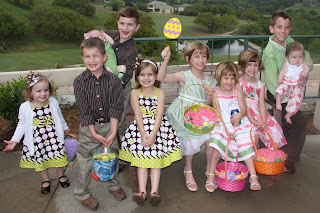 The Oldests – Luke and Will! 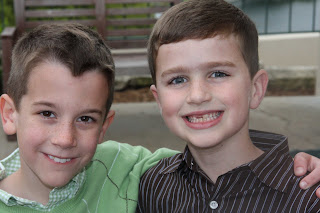 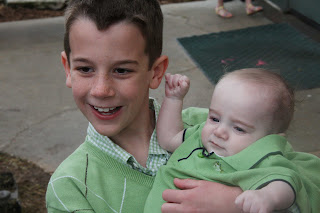 After that craziness, we all took a much-earned nap and then the party got started again when my parents and cousin Ava and parents headed over for Easter dinner.  The kids were so funny hunting eggs (don’t you like Will’s “arm move” with John Paul?) and the cascarones were a big hit once the kids figured out how to catch the adults off guard.  How ’bout that egg to the head, Uncle Daniel? 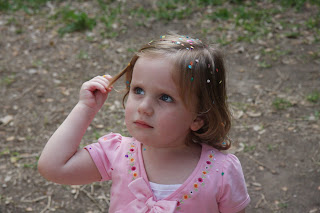 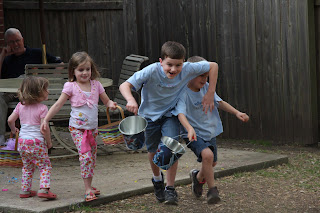 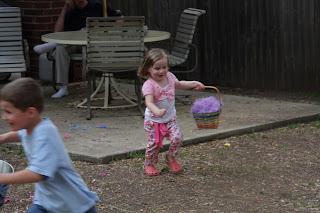 On Monday, you already read about your jaunt and “interesting” lunch at the Grist Mill.  All in all, I’d say score one for the memory books.  We had an amazing time with family and friends, celebrating a pretty awesome resurrection.
He is risen!

Posted in Uncategorized and tagged anna-laura, clare, easter, john paul, kathryn, luke, scott, will
← The Greats come to visit!Count to 10. →