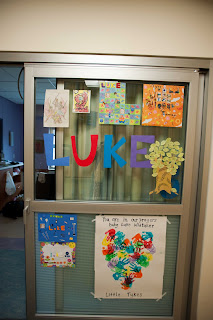 Since I’m in the thanksgiving mood and because I know that some of them stalk us in cyberspace…this post is for Luke’s many, many, many nurses.

We began Luke’s journey at Seton Main’s NICU.  Those first couple of days, I vaguely remember some really nice people taking care of Luke, but my eyes were fixated on his bed and his little body.  Slowly, the fog started to clear.  Because I was recovering from a c-section, and then nested for a week, I was able to be in the NICU quite a bit…which meant for some very meaningful conversations with Luke’s nurses.  Then the transfer to Dell and we really got to know our nurses (whether they liked it or not!)  Add in Luke’s subsequent stays on “the floor” at Dell and we encountered a new crop.

Admittedly, a few weeks ago I was a bit of a nurse snob.  We really only knew how NICU nurses functioned.  When we went to the med-surg (medical – surgery) floor, we were in shock.  It just wasn’t the around-the-clock care Luke had in the early days.  I complained that we went from first-class to coach.  Shame on me.

Nurses, like doctors, are a specialized breed.  After living in the hospital for so many days, we’ve really come to appreciate their specialization.  Some we’ve had were amazingly fantastic.  They held our hands while we got devastating news, they made us laugh, they explained a procedure because they could tell we were freaking out, they listened, they brought us magazines, they offered tissues.  Oh, and yes, they took great care of Luke.  Some stunk.  Hey, it happens.  But, when it did happen, I called the charge nurse and asked that they not be assigned to us again.  Sometimes, the “fit” just wasn’t there.  I remember one who knew I had five kids, asking me if I knew how to get Luke to latch on…um, sister, I’ve breastfed five kids.  If I haven’t figured it out by now, you need to call a counselor.

Interestingly, we’ve noticed there aren’t too many male nurses in peds…in fact, Luke has only had three and they were all great.  We had a “Luke Tree” in the NICU where each medical professional that cared for Luke filled out a leaf and affixed it to his tree.  I’m kicking myself for not making more leaves for his subsequent stays.  Maybe I’ll get organized and do it for the next surgery. 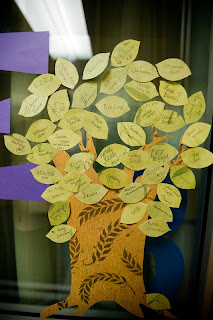 Posted in Uncategorized and tagged hospital, luke, nicu, nurses
← A Duck out of WaterTop Ten: Insurance Doesn’t Fool Me →