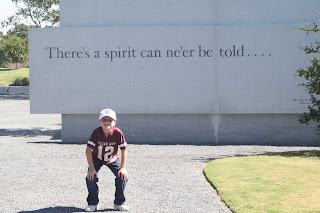 Hard to believe a decade slipped by so quickly.  Ten years ago the worst day in Aggie history happened.  Twelve people lost their lives.  Dozens more were injured.  Thousands mourned.  Millions were touched.

As an Aggie I’ve never been more proud of a response of a student body in the face of such tragedy.  Even though Scott and I were living in Indiana at the time, our neighbors knew we were Aggies and stopped by to offer their condolences.  People on the streets would see our Aggie shirts and give us a pat on the back and say a prayer.  Our A&M Club President was even on the local news.  At work, our co-workers wrapped their arms around our necks.  We shed lots and lots of tears.

A decade passes and the pain is still just as raw.  Scott’s brother was a student there at the time, his Corps outfit working on Bonfire just hours before it toppled.  Many of his friends died that day, as did a friend of Scott’s.

We will never forget.

God bless you – and the families you left behind – as they mourn your loss, miss your laugh and celebrate your life, cut too short.

We are the Aggies, the Aggies are we.  We’re from Texas AMC.