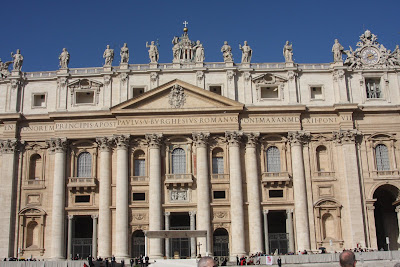 Today is a special day for us on the pilgrimage. We visit St. Peter’s and Bishop Aymond will celebrate Mass at the tomb of St. Peter. While I was unable to get a tour of the Scavi (we have been before and it is fantastic), we will be very close to Peter’s actual burial site. I found this information in case you want to know more.
“What we know today as St. Peter’s used to be called New St. Peter’s to distinguish it from Old St. Peter’s, the basilica built by the Emperor Constantine in the fourth century, over what he and everyone else understood to be the grave of Peter, prince of the apostles.
By the second half of the fifteenth century, however, Old St. Peter’s had fallen to rack and ruin; the decision was made to pull it down to make way for a new basilica. The building of New St. Peter’s, which would eventually include the world’s largest dome and the fantastically strong foundations needed to support it, took 120 years and absorbed the attention of twenty popes and ten architects, including such legends as Bramante, Michelangelo, and Bernini. The building’s changing design, the execution of those designs, and the fund-raising necessary to support such a vast project caused a lot of controversy, and contributed in at least an indirect way to the Reformation. Amid all the confusion and construction, little was done to explore the tomb of St. Peter. It was simply assumed to be where tradition and Constantine had sited it. “New St. Peter’s” was thus built without any systematic excavation of what was underneath Old St. Peter’s.
When the workmen began lowering the floor of the undercroft to accommodate the tomb of Pope Pius XI and renovate the grotto space, they discovered a series of tombs that, on further examination, seemed to be part of a kind of necropolis, complete with walls, streets, benches, funerary monuments, and so forth. Much of this had been disturbed or destroyed when the ancient Vatican Hill was leveled by Constantine’s fourth-century builders, but a fair amount of it was still intact. While World War II raged across Europe, Pius XII quietly authorized a full-scale archaeological excavation of the area, which continued throughout the 1940s.
Digging under the papal high altar of the basilica was something like peeling an onion or opening one of those nested Russian matrushka dolls. Eventually the excavators found a shrine, the Tropaion (the Greek word for trophy or victory monument): a classic structure with columns supporting what may have been an altar, surmounted by a pediment. The floor of the Tropaion, which has an opening delineating the boundaries of the grave over which the monument was built, defined the level of the floor of Constantine’s basilica. At the back of the Tropaion was a red wall; exposed to the elements, it began to crack, necessitating the construction of a buttressing wall to support the whole structure. When archaeologists unearthed the buttressing wall, they found it covered with graffiti. And it contained a secret, marble-lined repository. One piece of graffiti, decoded, seemed to say, “Peter is [here!]”
Thanks to long delayed renovation plans, the need to accommodate Pius XI’s tomb, and the curiosity of Pius XII (who seems to have been intrigued by the discovery of King Tut’s tomb in 1923), archaeologists eventually unearthed a small city of the dead beneath the foundations of Old St. Peter’s, which had been incorporated into New St. Peter’s as supports for the colossal new structure. There had been, evidently, a vast pagan burial ground on the Vatican Hill. At some point, Christians began to be buried there. The central grave that defines the Tropaion is surrounded by other graves, which radiate toward it. Thus it seems that the remains of St. Peter, which would have been among the most jealously guarded relics of the ancient Roman Christian community, had been buried, perhaps immediately after his death, perhaps a brief time later, in the Vatican Hill necropolis: secretly, but with sufficient clues to indicate to pious Christian pilgrims the location of Peter’s tomb. Perhaps the remains were, during persecutions, moved to a less risky place and then reinterred. Perhaps the Tropaion was part of a Christian complex that, in calmer times, was used for baptisms, ordinations, and funerals. Perhaps, before the Tropaion was built, the grave itself was used as a site for small Christian gatherings in the dead of night.
No one knows for sure. Archaeology isn’t algebra; it yields probabilities rather than certainties. But reputable scientific opinion today holds that the excavations under St. Peter’s in the 1940s — originally undertaken for an entirely different purpose — did yield the mortal remains of Peter.
Oddly enough, amid the fragments of Peter’s skull, vertebrae, arms, hands, pelvis, and legs, there is nothing from the ankles on down. But perhaps that isn’t so odd after all. If a man has been crucified upside down, as tradition says Peter was, the easiest way to remove what was left of his body (which may well have been turned into a living torch during his execution, in another refinement of Roman cruelty) would have been to chop off the deceased’s feet and remove the rest of the corpse from its cross.
The remarkable sites beneath St. Peter’s are known today as the scavi (excavations). A walk through them is a walk into some important truths about what it means to be a Catholic.”
Credit for this artcile is here:
http://www.catholiceducation.org/articles/religion/re0735.htm