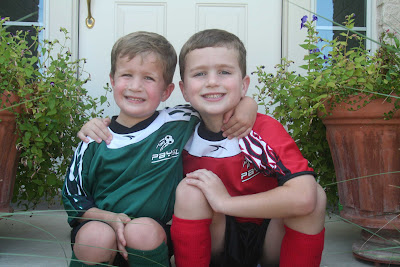 Saturday the craziness began. But, boy was it fun crazy. The boys’ games were on fields next to one another (lucky for us) and back-to-back. We’re starting to feel like Friday nights are the new Sunday nights. You know what I’m talking about…lay out the soccer clothes, pack snacks, fill up water bottles, wash uniforms, yadda, yadda, yadda.

Will’s team really tore up the field. Their debut game was a great way to start the season. In P-town, the soccer league does a great job of keeping you with the same teammates and coach – we’ve had many of the same players and the same coach for the last 5 seasons. Shoot, Coach Jacob feels like a family member by now! As usual, we were incredibly proud of Will (aka Team Captain Will today!). Like his dad, he is a student of the game. The athletic ability may not be “Bend it like Beckham”, but the boy has some skills. And some fun. We can’t ask for more than that. They played their hearts out and came away smiling. 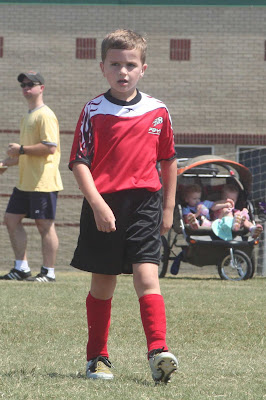 John Paul’s team. Ah, John Paul’s team. Once they figured out which goal to run to, the fun began. He was a bit trepidacious that first half. Running to kick the ball occasionally and then turning to wave at us – you know, to make sure we were still watching him. But, man, who let the dogs out after the half? He was a scoring machine. Scott says he scored 2.5 goals (2 real goals and 5 ‘almosts’). Again, all smiles and a wee bit sweaty after game numero uno. 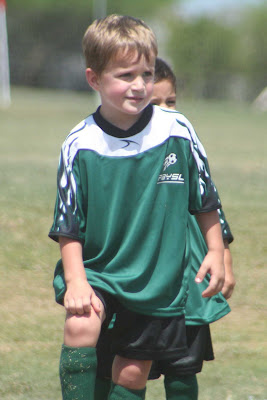 The afternoon was exceptional – a little hot – but outstanding. So much so, that we decided a stop at Sonic was in order. Raise a cherry limeade to many more fun Soccer Saturdays.